A Valencia Free Walking Tour Spain – who could resist?

We are addicted to Free Walking Tours. We were on one of our many European tours, this time it was Valencia Spain, one of our favourite cities in Europe.

One of the top things to do in Valencia, Spain was a Valencia Essentials Free Walking Tour. For a couple of hours, it is a great way to understand and appreciate the city you are visiting. The guides are passionate and great storytellers. Our experienced and passionate Guide was Ampora. Have you tried any free walking tours? Although they are a free tour tips are greatly appreciated at the end.

There is so much to see and do in Valencia Spain you will need at least a week to see them all.

If you are staying in Valencia here are some hotel recommendations for you close to the starting point – Valencia City Centre:

Valencia was founded by Roman retired soldiers in 138 b.c. The Latin name Valentia means ‘strength’ or ‘valor’.  It is the third largest city in Spain.

Plaza de Virgen is one of the oldest squares in Valencia.  The Fountain in Plaza de Virgen symbolizes the River Turia and it represents Neptune surrounded by 8 naked women.

The Cathedral was built on the site of an old Mosque in 1262.

The Main Gate was built in Baroque style during 1703 – 1741.  The name of the Virgin Mary appears at the top of the iron gate.

Apostle Doors – note there are no hands or arms on the sculptures surrounding the gate.  The material used was sand and the humidity in the city can’t maintain the materials used.

The Basilica – near the cathedral has been built on the top of the Roman remains.  The forum is under our feet where we were standing in the Plaza de Virgen.  The corridor was constructed between the cathedral and the basilica to allow the religious people to move freely and not mingle with the locals.  The difference between the Basilica and the Cathedral is in the Basilica you pray only to the Virgin Mary whereas in the cathedral you pray to God the Father.  Inside the Basilica it is very small and round and built in 1652 in the Baroque style.  Note the paintings in the dome of the Basilica.

There are 3 famous drinks in Valencia:

By this time we were halfway through our walking tour and a great place to stop for a drink.  A colorful marketplace with a unique ceiling which was constructed during the 1920’s. A hive of activity  6 days a week, closed on Sundays.  Best time to visit is in the morning, but if you are looking for good value, you will find cheaper fruit and vegetable shops outside the market.

Placa Redonda is a famous Square in Valencia full of history.  Redonda means “round”.  It started life as the meat market for Valencia, a hole in the middle of the city.  During the 1980s the square was famous for Valencian ceramics.  The square contained apartments above the shops, a lot of the local gypsies had moved into the square and damaged the apartments, they were subsequently moved out.  In 2012 a new roof and new floor were constructed, the locals now feel that the Square has lost its soul.  It feels like that when you walk around it, we visited on a Sunday as well as during the week and it felt lost and empty.

The narrowest building in Europe is only 1.7 m wide and contained one apartment on each floor. There were no toilets within the structure and each morning the night’s ablutions in a bucket were thrown outside into the square below with the cry ‘water is coming out’.  The fish market was also located here in the square.  In 2012 the bar beside it became an addition and it cannot now claim its right as the smallest building in Europe anymore.

Located next to the Cathedral is the L’Almoina Archaeology Museum which is considered to be one of the best in Europe. As you wander around you can see the 2nd-century baths,  two streets that were the main thoroughfares in Roman times, and the courtyard of the old Muslim city. You should allow about an hour.

Meeting Place:  Plaza de Virgen at 10.30am – look for the orange umbrella with Free Tour Valencia in Valencia Old Town.

When you visit Valencia we can highly recommend another free walking tour – the Valencia Emblematic Tour.

One of the most popular hotels in Valencia is the Tryp Valencia Oceanic Hotel we have the latest prices and availability here.

Here are some hotel recommendations from TripAdvisor where you can check the latest prices and availability.

There are many properties available to book through Airbnb.

If you have not tried Airbnb before we have s special discount voucher that you can use for your first booking – click here to receive your voucher.

It is easy to get around in Valencia by metro.  For more information click here.

Things to do in Valencia Spain

The Oceanarium Valencia is a popular excursion.

Why not visit a Valencia beach for a morning or an afternoon?

A Hop on Hop Off  Valencia Bus tour around Valencia city is highly recommended.

Have you been to Valencia? Have you taken any free walking tours?

We have many articles on Spain for your enjoyment.

If you liked our article, why not pin it for later. 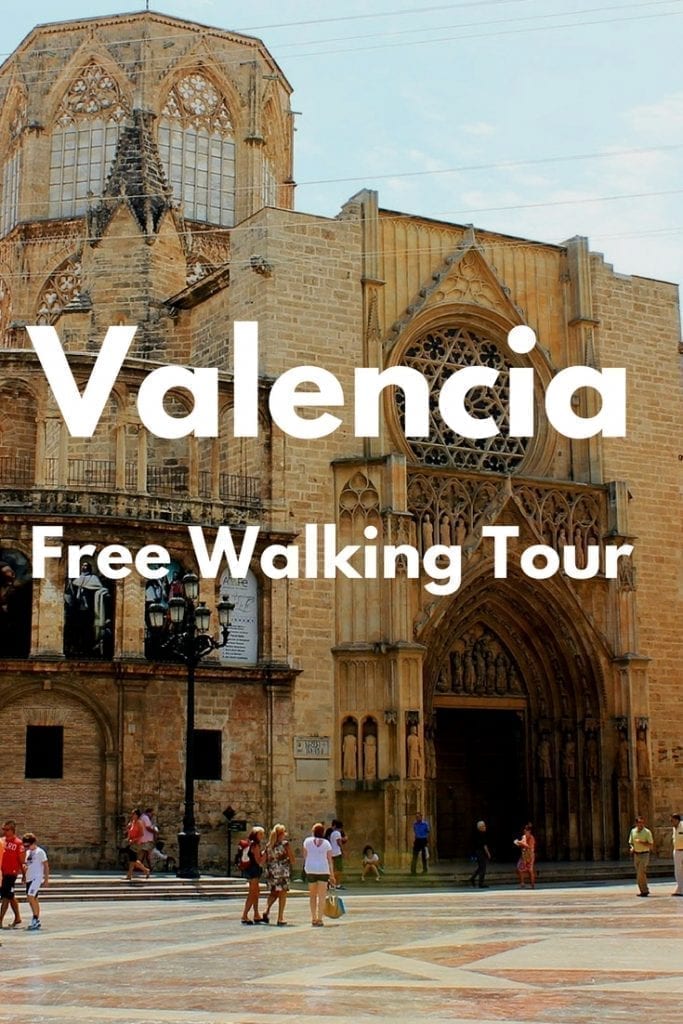 Disclosure: Certain links in this post are affiliate links. This means that should you make a purchase via our link, we will receive a commission which will not affect the price you pay.

www.totraveltoo.com is a participant in the Amazon Services LLC Associates Program, an affiliate advertising program designed to provide a means for sites to earn advertising fees by advertising and linking to amazon.com, amazon.co.uk, amazon.ca. Amazon and the Amazon logo are trademarks of Amazon.com, Inc. or its affiliates

How to spend 24 hours in Ghent, Belgium

What to pack when traveling to Barcelona

20 photos to inspire you to visit Germany