We love free walking tours especially the Casco Historico tour we did in Seville, Spain.

The tour started in Plaza Nueva near the Ayuntamiento (Town Hall) at 10am.  You can’t miss the guides from FreeTourSevilla – the yellow umbrella is up and waiting for you.  Our guide Miguel was passionate about Seville! 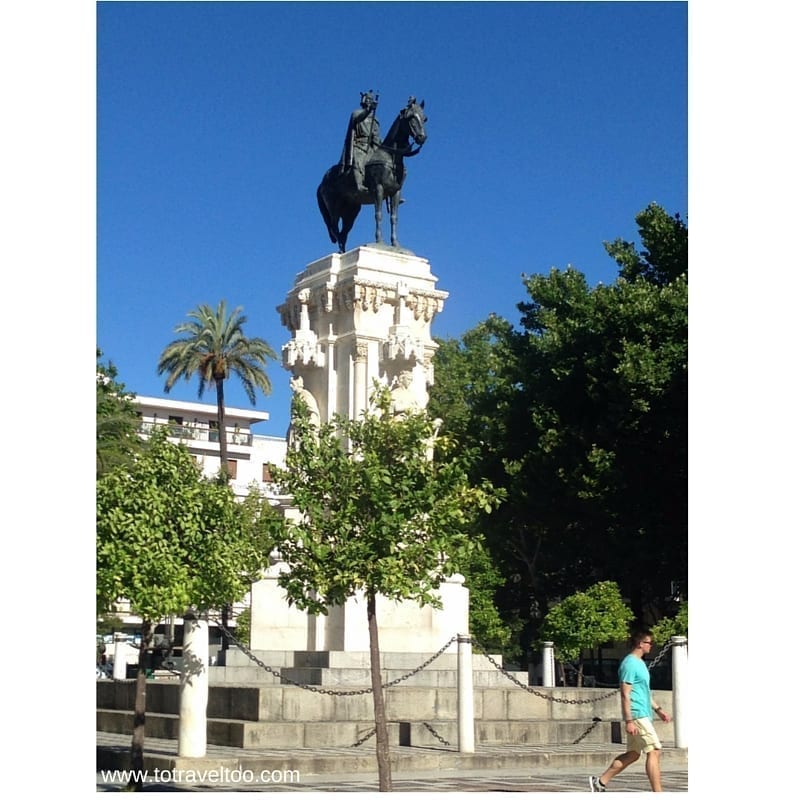 After a few minutes wait, we were off and the first place was where we were standing right in the centre of the Plaza there is a statue dedicated to King Fernando III who reconquered the city from the Moors in 1248.  Between 1270 and 1840 the Plaza was occupied by the Convento Casa Grande de San Francisco. The Plaza is a new square (hence Plaza Nueva) only 150 years old, whereas most of the buildings in Seville were constructed during the 16, 17 and 18th centuries. 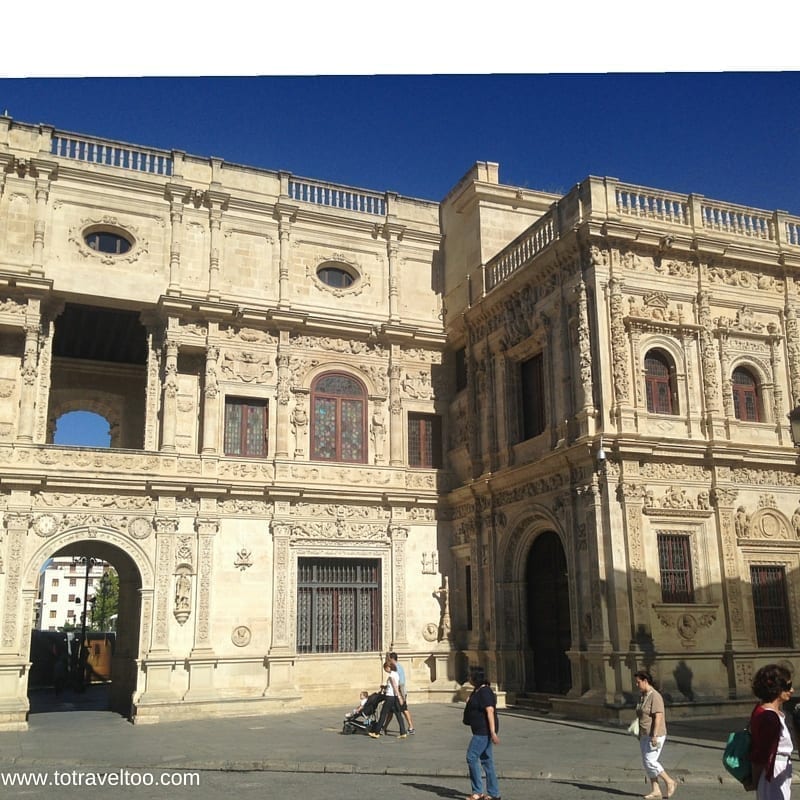 The Ayuntamiento (Town Hall) took 30 years to build from 1526 to 1556 under the direction of Diego de Riano.  It was built on the remains of the former San Francisco Monastery.  There is a legend around the archway of the Ayuntamiento; if you walk underneath the archway you will never get married. Miguel walks through the archway every day and he informs us with a laugh that he is still not married, maybe there is some truth to this legend.  The Town Hall is used today for weddings and formal receptions, it is where the City Mayor has his office.  It is also the place where demonstrations are held and today was no different, as we arrived a large, noisy demonstration was taking place. 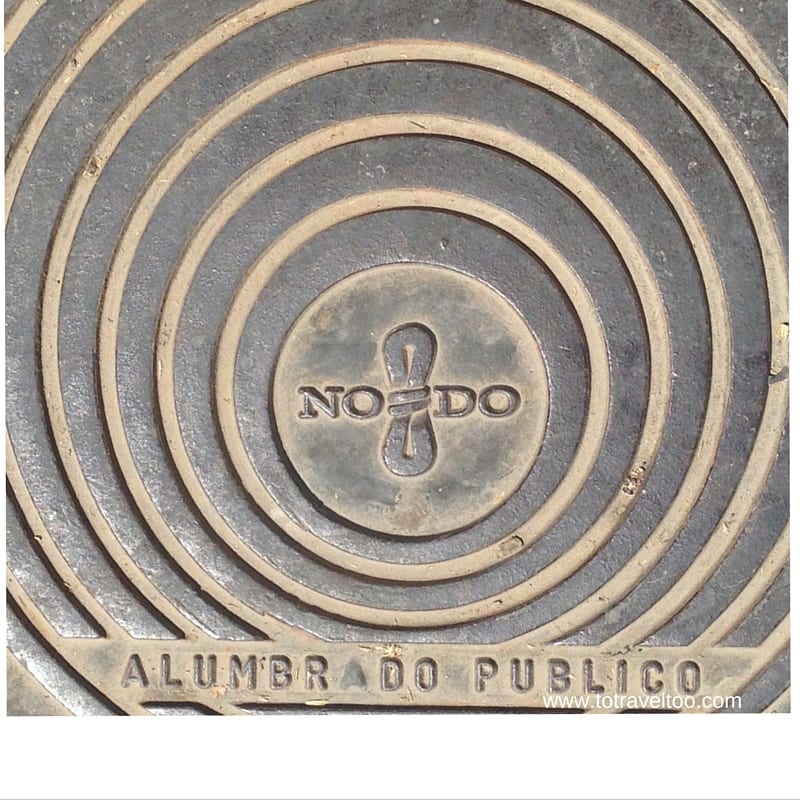 This is the one time you watch where you walk! Throughout Seville, you will see the mysterious symbol NO8DO.  This symbol, with origins reaching back to the middle ages,  stands for ‘she will not abandon me’. King Alfonso X The Wise during the 13th Century fought a battle attack from his own son, Sancho for the throne. The people of Seville stayed strong with the King and he rewarded Seville this slogan to celebrate its fidelity.  This photo is of one of the covers on the drains with the symbol showing. 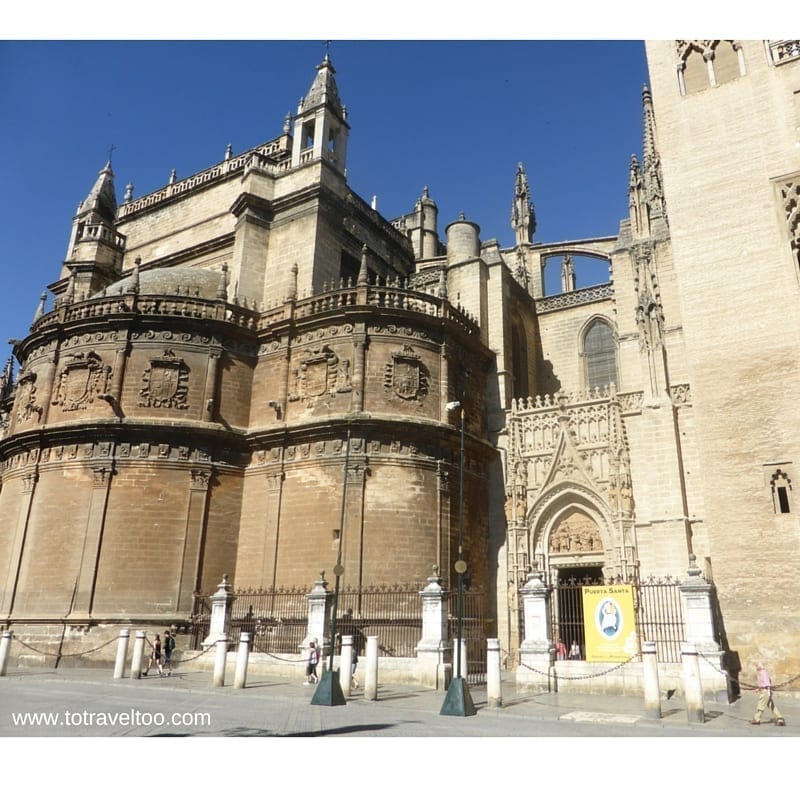 The external wall, the courtyard and the tower of the old Mosque was built during the 12th Century by the Moorish Dynasty the Almohads. Seville fell to the Christians during 1248.  The Christians took over the Mosque and used it as their place of worship until the 14th century when an earthquake destroyed the structure.   At this time the Christians decided to build the biggest Cathedral for all to enjoy and it was completed during the 15th Century.  It is the largest Gothic Cathedral in the world.  It is impressive and definitely worth a paid visit inside. 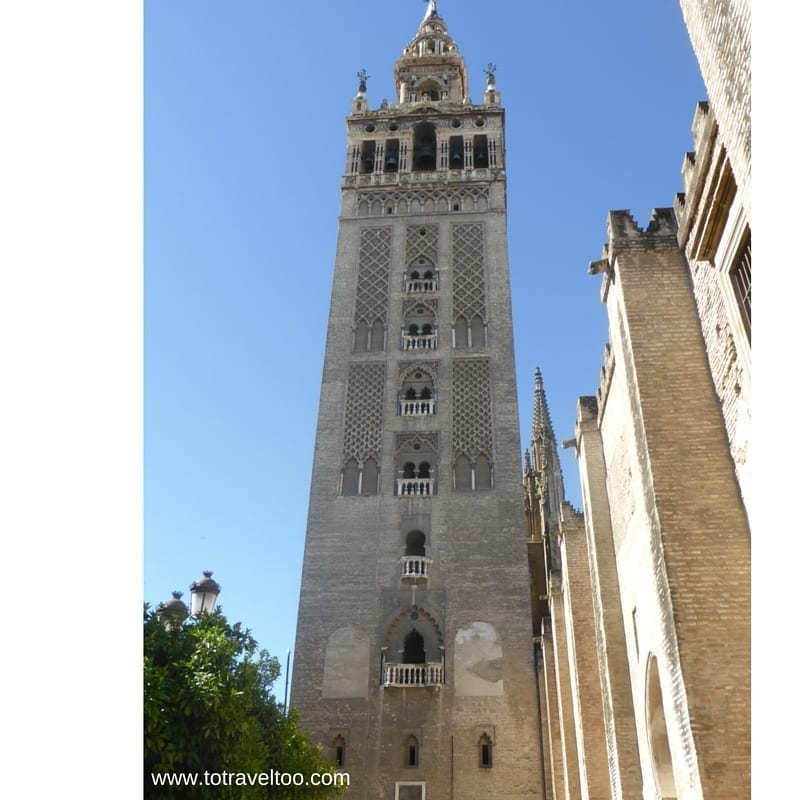 The top of the tower is built in the Renaissance Gothic Cathedral. The tower should be at the main gate but there were problems with the water locations in the city, instead, it was constructed here at the side facing the square. It is built of sandstone and marble. There is no rich decoration which is in line with Islam’s teaching which is to be humble. The woman on the weathervane at the top of the tower is the Greek God who represents ‘faith’. 35 ramps are located leading to the top of the tower, tall enough to allow a horse and rider to reach the top.  Ramps were easier for one person to climb up to the top of the tower five times a day for the call of prayer.

Christoper Columbus who died in poverty in Valladolid in Spain is buried inside the Cathedral.

It is now classified as a UNESCO World Heritage Site.

To Travel Too Tip

For entrance into the Cathedral without queueing we recommend that you visit the El Salvador Church in the Place del Salvador, your ticket purchase includes entry into the Cathedral – by passing the queues.  It is one of the most beautiful churches in Andalusia and houses a lot of art works.  Entrance fee is Euros 9.00 per person.

The Alcazar of Seville 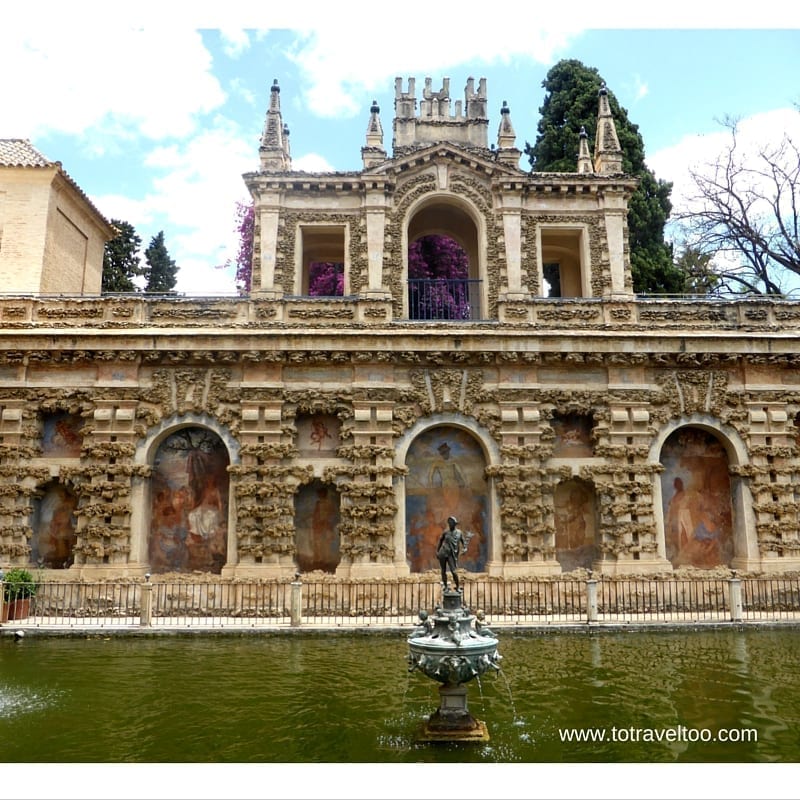 The Alcazar was built during the 8th century.  It was the Palace of the Governors of the City. The courtyard was used for the set of the Court of the King of Jerusalem in the movie “Kingdom of Heaven” a Scott Ridley production.  The 5th season of the Games of Thrones was set here and around Seville.  It is the oldest royal residence still in use today in Europe.  It is definitely worth spending a few hours wandering through the royal residence and its gardens.  Entrance fee Euros 9.50.

The General Archives of the Indies 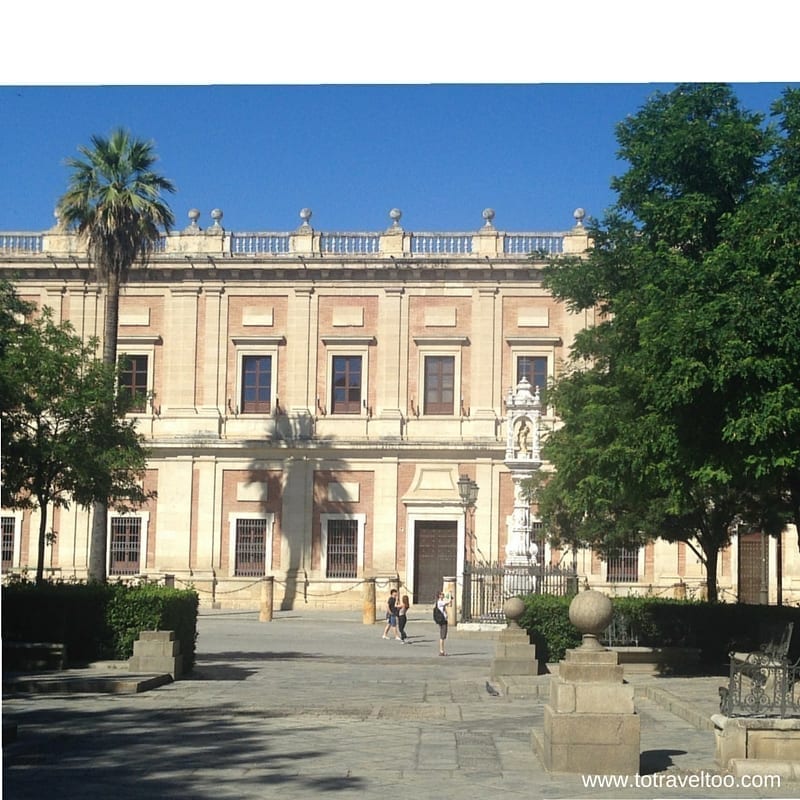 General Archives of the Indies

In front of the Alcazar is the General Archives of the Indies. It houses the most important archives of the world with copies of all documents pertaining to the history of the Spanish Empire in the Americas and in the Philippines. 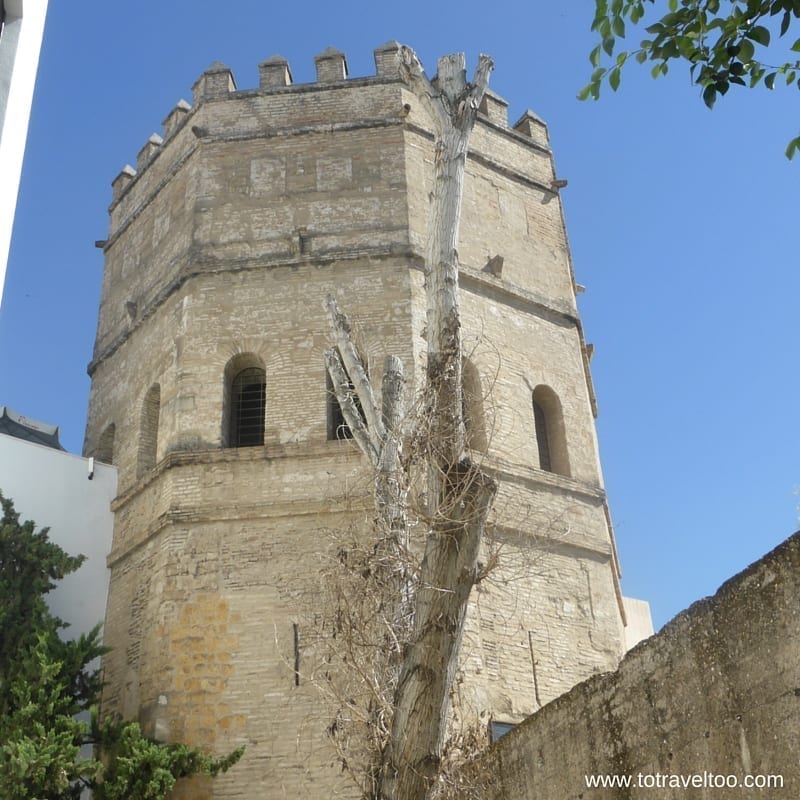 The Silver Tower was built in the 13th century in an octagonal structure by the Almohads.  It was used as a defensive tower as it was close to the river.  Its purpose was to protect the port and a place where taxes were collected on arrival at the port. 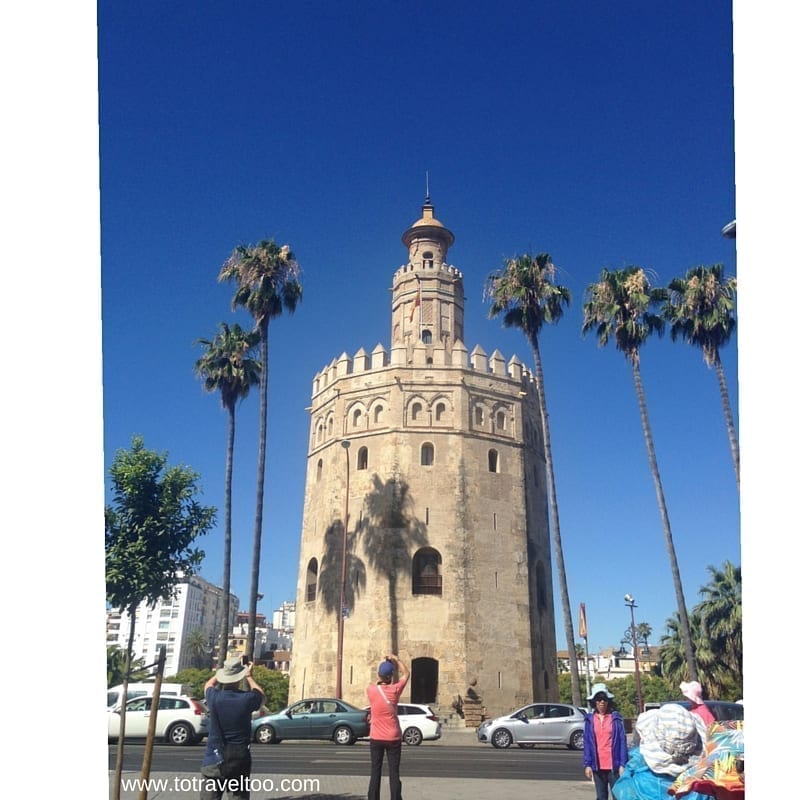 The Golden Tower was built around 1220 by the Almohads.  It was part of the defensive walls around Seville and linked to the Silver Tower.  The Golden Cuppola at the top was an added addition during 1760. 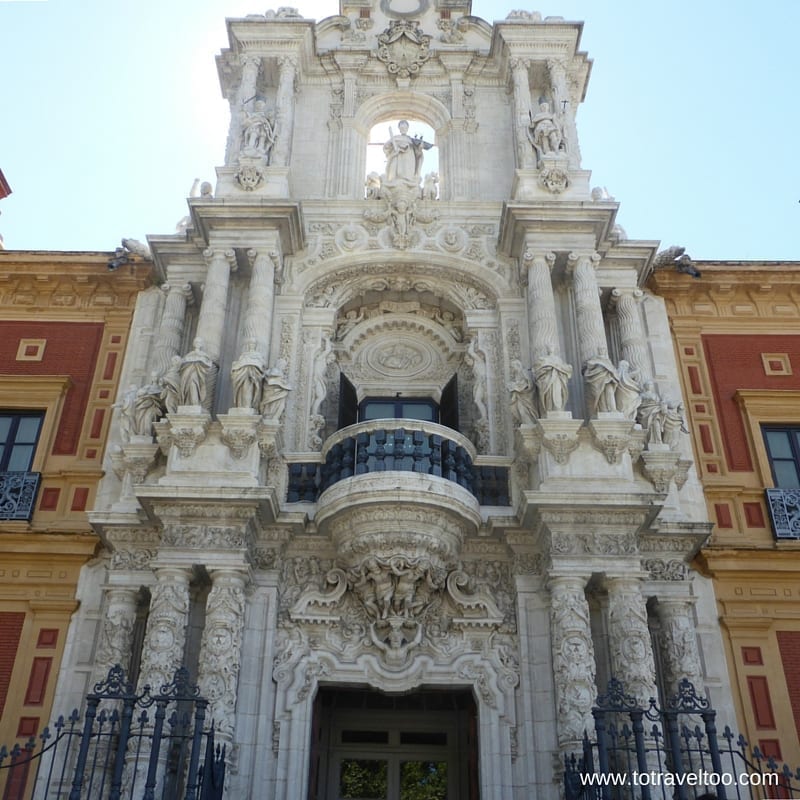 On Paseo de Roma is the San Telmo Palace. It was constructed in Baroque style during the 17th century as  a university for sailors and navigators.   The name San Telmo was given to the Palace as it was named after the Patron Saint of all Sailors.  The women around the columns of the palace hold the names of the subjects that the students need to pass in their studies.

In the middle 19th century the Duke of Montpensier bought the Palace. The Duke lived there for 50 years before he died, on his death, his widow gave the Palace to the Archdiocese and also gave the city 59 hectares of land.  It is now used as the seat of the presidency of the Andalusian Autonomous Government. 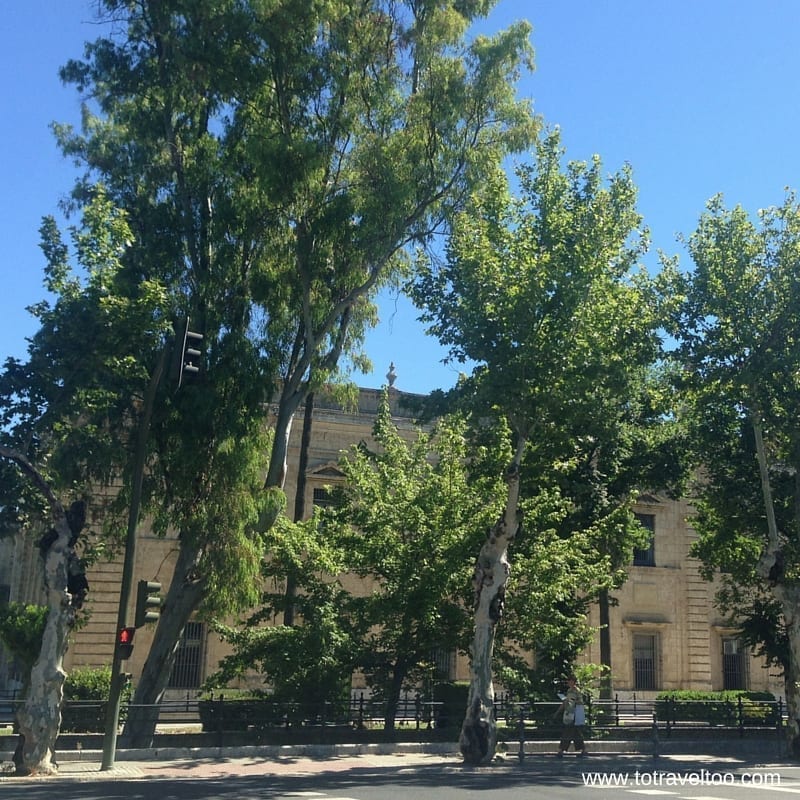 In 1492 the Spanish first came across the tobacco plant when they discovered America.  The Royal Tobacco Factory was first established here in Europe during the 18th century. Tobacco was used to make snuff, later they realised it was quite a lengthy process and a heavier workload, they turned to making cigars instead.  Women were employed to make the cigars as they were better at the rolling process than men were. A moat was constructed around the building, it was built to protect the tobacco works from an attack.  If, as an employee, you arrived late for work you were imprisoned in the factory overnight and the moat was used as a deterrent in escaping. It is now part of the University of Seville. 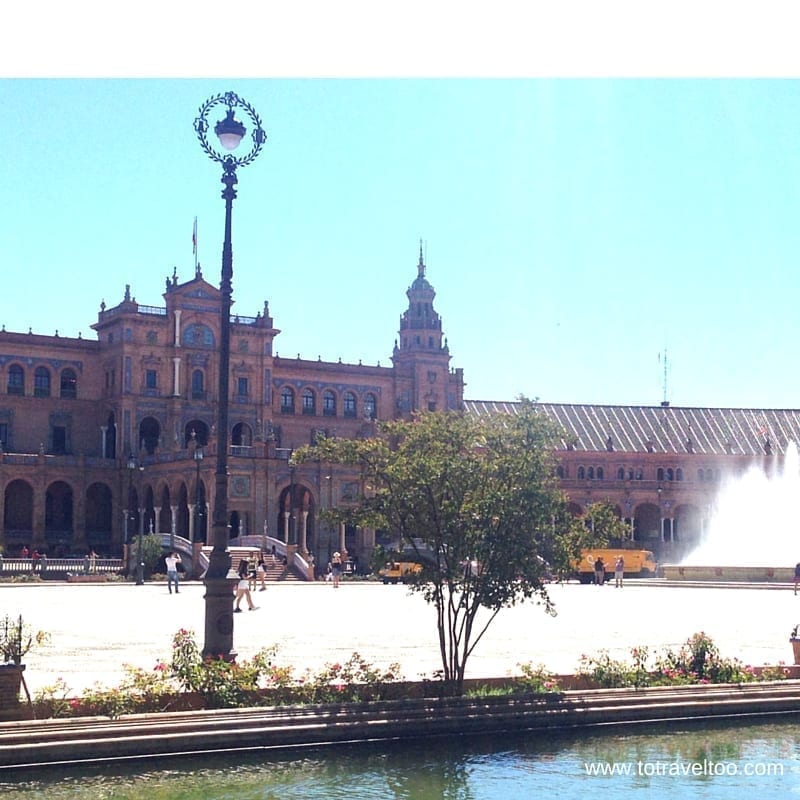 Plaza de Espana was built in 1928 for the Ibero-American Exposition of 1929.  It was designed by Gonzales in a semi-circle structure representing the four Kingdoms of Spain.

It was featured as the Arabian Headquarters  in the film ‘Lawrence of Arabia’ and also appeared in the Stars Wars Episode 2 Movie.

This was a very impressive sight to end the walking tour with.  We had our photos taken with Miguel, said how much we enjoyed his knowledge of his town and we left to wander through the Plaza.  Under the arches, we listened to a young man play a haunting flamenco tune on his spanish guitar whilst his partner stamped her feet and with arms flying and castanets clicking, performed a fiery traditional flamenco dance.

Meeting Place: Plaza Nueva – look for the yellow umbrella at 10.00am

Have you enjoyed a Free Walking Tour?

Why not take our article with you?

Top 15 Most Beautiful Places To Visit In Vietnam